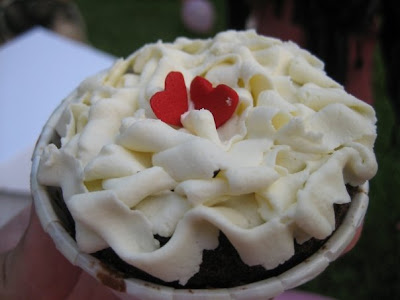 You are looking at probably the only photographed cupcake I made for the pinkdot event!
Speaking of which, I took a cab, paid peak period surcharge reached there like 5 plus only to miss CASS then I was too shy to give out the cupcakes so I pratically dragged Liz around and then I had to rush off to Alison's birthday party. So, I was basically at Hong Lim Park for like 15 minutes giving out cupcakes and that was my first experience at an event like Pinkdot. Crazy eh?

Anyway, I hope Alison had a blast at her party and that she remembers to take pictures of my card! Well, I would not dare to hope that she took pictures of the cupcakes I made her. Oh well. It really SUCKS not having a camera! Anyway, they werent very pretty I think because I was in a rush. Note to self: Do not ever ever make anything in a rush. STUPID.

I have this really odd thinking: Happiness always does not seem to last or rather is shortlived? Somehow, like you can generally have a really happy day only to have one thing spoil it in the end. Or that you can be happy for maybe several weeks then all the happiness would be "erased" by some unhappy event which is more unhappy than how happy you were. I dont know. Maybe its some cycle of happiness.
Posted by chocolatecup at 3:20 AM

amy amy!
Ur so lucky!
I haven touched ur cupcakes at all cos they are too pretty to be eaten.
Immediately went to take loads of pics of ur cupcakes upon reading ur entry. And after which my dad grabbed the prettiest one and gobbled it up haha!

Those are adorable! I like the little hearts where did you get those?

@alison: haaa. awww. they are not pretty this time! i was in a rush!! i hope he found it gd:)
@michelle: i got it at a local baking supplies store!:)

Lovely cupcake! Very cute photo!
Happiness... I think you have it in you. Some people's is stronger than others, and that determines how lasting it is or how easy it is to "erase" it by some unfortunate event. But mostly, it cannot be found outside, it doesn't really depend on any external factor. It's a state of mind :)

@Marta: thank you:)hmmm. very interesting your comment about happiness. i shall have to think about it:)

hello! thank you for leaving a comment on my rings, it made me really happy :)

and i love your cupcake! the hearts make it so cute.

and on the topic of happiness - the unhappy moments in life only make the happy moments so much sweeter and better, in my opinion. we need the ups and downs to stay human!

giving cupcakes to random ppl? how cute can u get? ha! will be giving my second shot at baking today! though those banana walnut cupcakes, or fa kueh as some called it, really set me back.. =(

so shifu~, u really mus help me chong xin zhang qi lai. u die die have to teach me how to make those lovely profiteroles u r pro at!

aaaw, cute cupcake!!!! And so much love! :)
u asked me what's ceviche on my blog... It's a Latin American appetizer dish where seafood is "cooked" by being marinated in fresh lemon or lime juice a few hours or overnight. U should try it, so yummy!!!
Thanx for the comments! Btw, how did ur exams go?

@tramie: wow... sounds gd to me the ceviche:) hmm. my exams went horribly and now i dread getting the results back:(