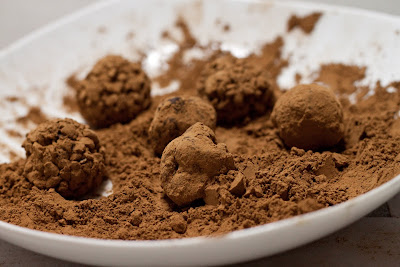 My homemade truffles may not be as good as the ones from here but it was good enough to capture his heart, according to the bf. The story of how we fell in love or rather how he fell in love with me was in actual fact an entrapment in his opinion. It was I, the sultry temptress who employed the clever use of truffles that ensnared his senses and claimed his heart for my own. I know (hope) he jests about the entrapment business but truffles are really one of his favourite things. He gets as excited as a little boy whenever I gift him with these chocolate mounds. 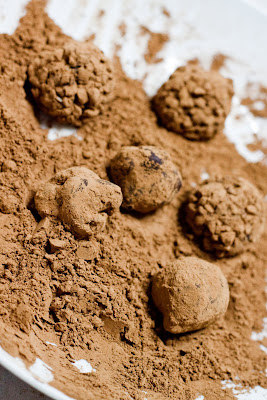 What then can be a more perfect gift than truffles for his belated birthday celebration? In fact, I would go as far as to say that he would rather receive a box of 20 truffles than the crazy amount of things I had baked for him on his last birthday! 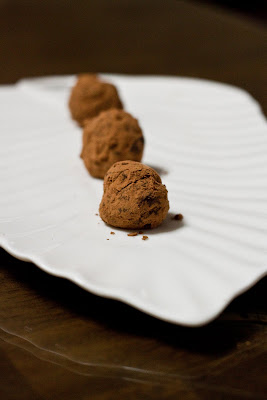 Remember how I talked about being a bad friend? I was made a bad girlfriend too because of schoolwork! I had a paper due the next day on his birthday and as I was rushing it, I had absolutely no time to celebrate it with him. Although, I guess I supposedly "celebrated" it for him by flashing a "sign" (pens+foolscap paper) that said "Happy Birthday" at 12am in the library which was where we were the day before his birthday. 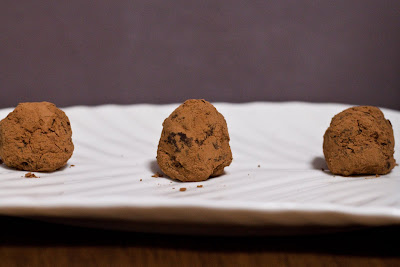 We, of course celebrated it properly, truffles and all after our exams and although it was a small affair, it was by no means any less enjoyable.

Many thanks to Brad who bought me a block of awesome chocolate (Haigh's!) from Sydney of which I used to make these lovelies! I would have used the entire block to make these truffles if not for the chocolate mouses residing in my house! As luck would have it however, a friend gifted me with a bar of chocolate from Switzerland which made up for the needed grams! Awesome is it not to have lovely friends? 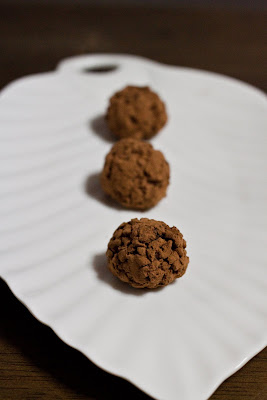 Since I have made these truffles a million times over with the same recipe, I decided a little change was in order and thus tried out a new recipe. The bf being the bf could not discern between the "new" and the "old" truffles but declared it delicious nonetheless. I thought it pretty tasty although I have to say that I prefer it without the new addition of Grand Marnier. Call me boring but I like my truffles simple.
Posted by chocolatecup at 2:06 AM

Email ThisBlogThis!Share to TwitterShare to FacebookShare to Pinterest
Labels: truffles

I am with you, I like my truffles simple. These look and sound delish. You did such a nice job with them.

Awww, I love it when food is equated to/reminiscent of a love story :) And while your truffles look so delectable, I'm sure it's the lovely lady who made them that got the gentleman hooked! Hehe.

Just found your blog and I am so glad! Love it!

@Maria: i am happy that you like what you found:) i am quite lazy so updates are very sporadic! haha

@fatkuraprincess: thank you hon! hope you have been good:)